If you visit Saint Augustine, you might think–“Boy, that’s a great place, and very cosmopolitan with all the museums, and artist studios, and high end architecture.” But if you lived here, you’d know that deep down Saint Augustine is just a prettier-than-average country girl with a bit of a shyness problem.

All of us residents think that it’s a great place–don’t get me wrong–but at the end of the day it’s just our little town. Despite all the prettiness, we don’t have a lot of high-falutin’ ideas about ourselves.

Yup, it’s us and a couple of little towns around the globe–towns like Vienna, Brussels, Copenhagen, Hong Kong and Madrid. Maybe you’ve heard of them.

Anyway, we’re all pretty psyched about it. It was on the front page of our local paper three days in a row.

Feeling left out? Well, you might not have time to fly to Hong Kong (I think their lights are down already), but you still have time to get to little Saint Augustine. The lights will be on through the end of January.

If you can’t make it, here are a couple of pictures to whet your appetite for next year.

This is the park. It’s the epicenter of romance, with all the trees lit up overhead. 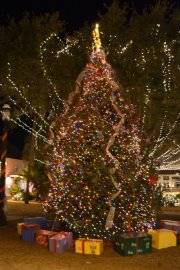 The town tree. (Note: the gift boxes are empty. A cruel joke).

And a little place we like to visit–the Bayfront Marin House.

Hope we see you there soon!!!