Many people have asked me just how I’ve gotten this way. And I don’t just mean psychiatrists, either. Normal, concerned individuals have asked: Why do you love historic destinations so much? Do the old portraits make you feel pretty by comparison? Do you think mustiness is a treasured perfume? Are you just against hotel chains on principle?

The answers, of course, are yes, no, and yes. But there is a deeper reason.

I love old buildings, old portraits, and old furniture because of this: 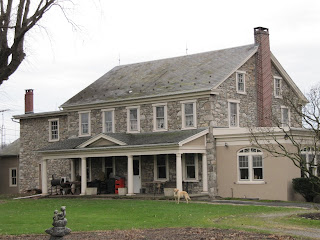 Yes, that’s the childhood home. It’s been in our family since the 1700’s, when my great great great great great grandfather bought it from Thomas Penn. Apparently young Thomas inherited his Pop’s stake in Penn’s Woods (along with his brothers) when William passed in 1720.

My brother owns the house now, and–to assert that it was his house and not Dad’s anymore–he just removed the plaster and re-pointed the house in June. When I was a kid, the house was white plaster with black shutters. I was afraid that the hidden stone would be ugly (Why would someone have covered it with plaster? I asked my brother more than once as he planned the project). I was wrong, obviously. The stone is beautiful.

The inside is even better: the house boasts

My room was in the “back” of the house, facing the driveway and the old barn. I wallpapered it myself around 1979, and I rearranged the furniture as often as I used to apply pimple cream.

And that’s why I am the way that I am.

Please tip your docent on the way out.