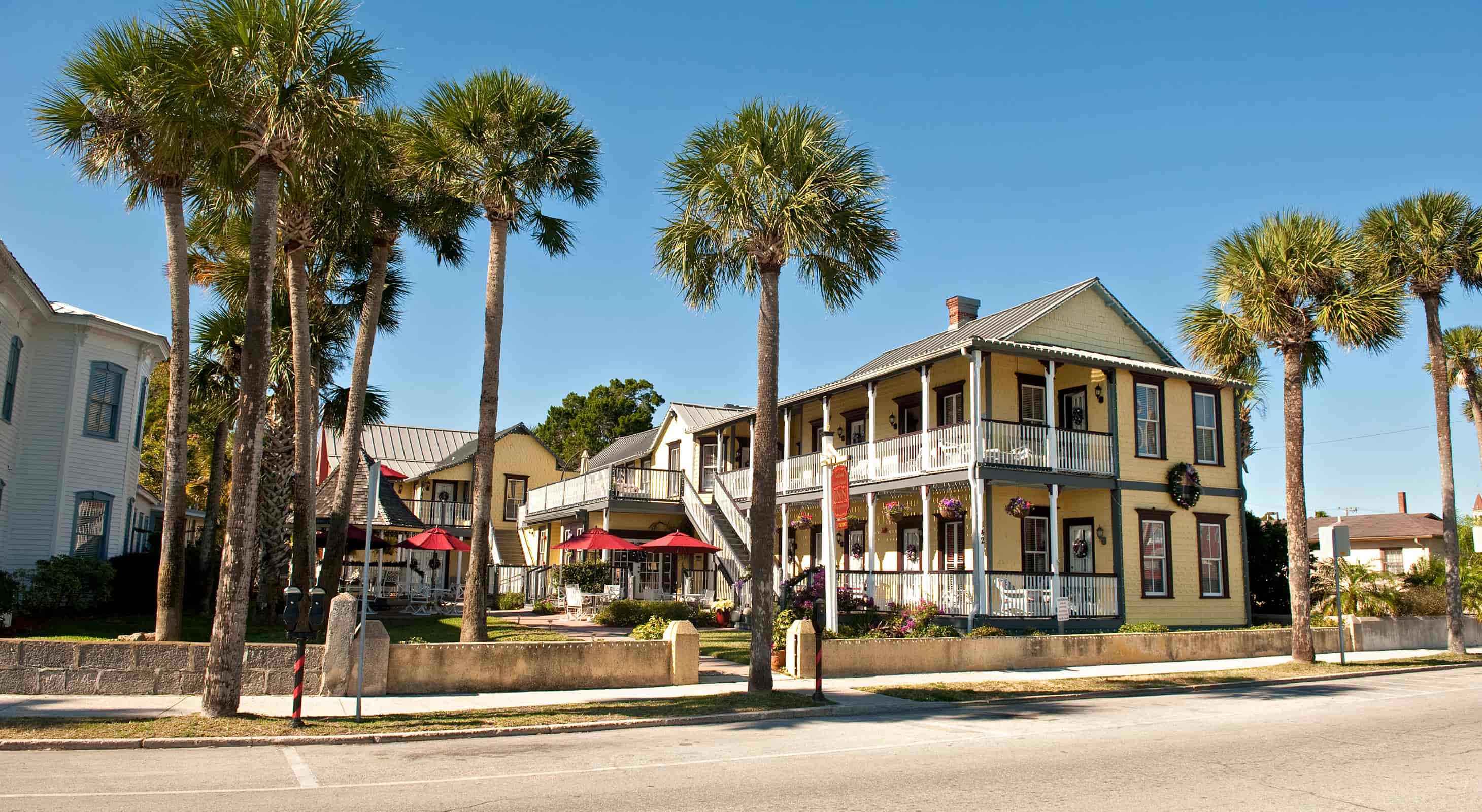 Previous Next
A Vacation Destination with a Unique Sense of Place

St. Augustine is the oldest, continuously occupied European city in the United States. Its oldest history is notable in the Castillo de San Marcos, Fort Matanzas, and Architecture from its French, British and Spanish heritage. Our beautiful boutique hotel and vacation rentals in downtown St. Augustine sit at the heart of it all! 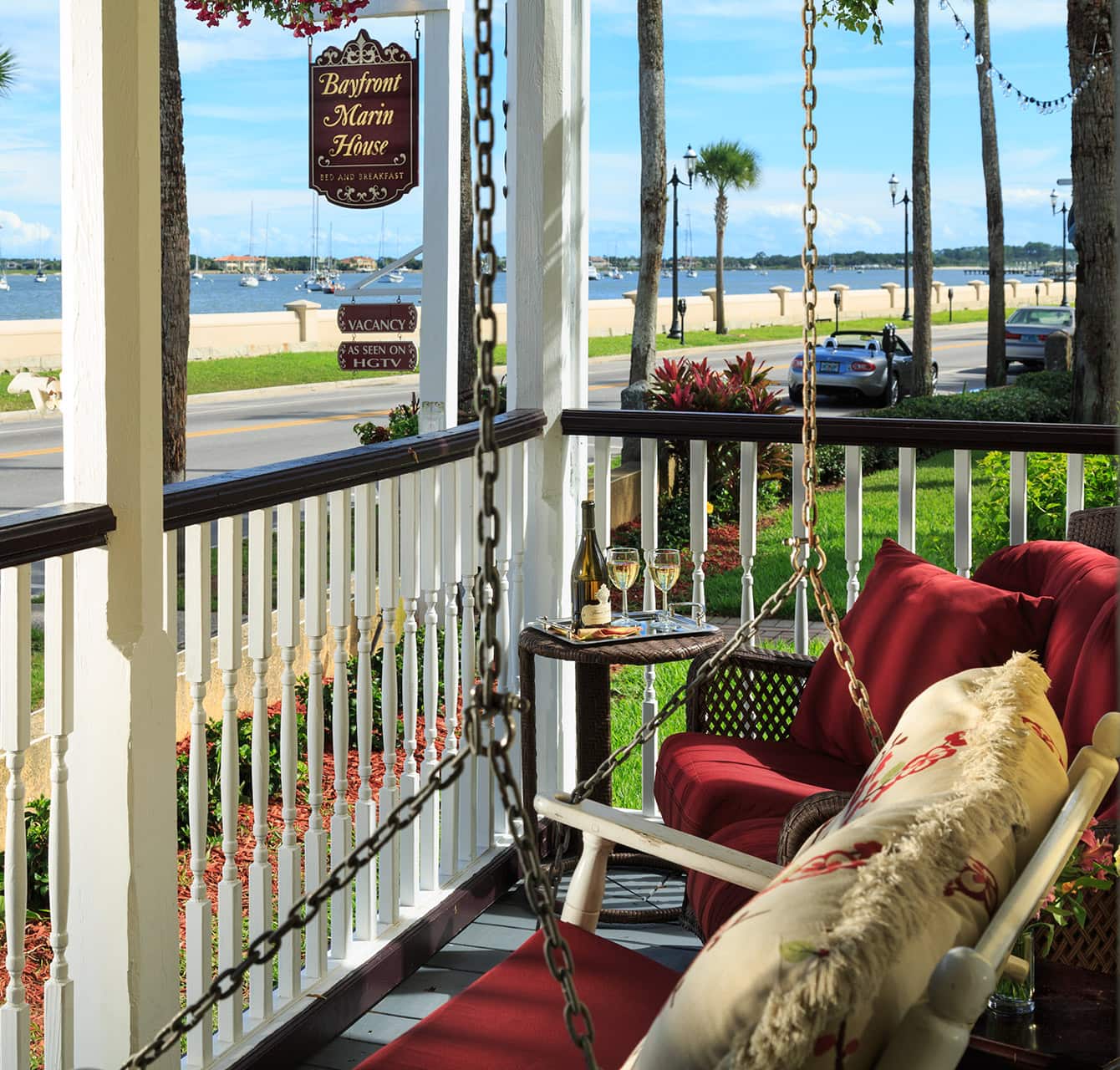 A Property & Location Rich in History

When you stay at Bayfront Marin House, you’ll have easy access to all of the things that make our area so unique.

Historic St George Street is largely restored to its original appearance. It’s lined with shops, restaurants, galleries and museums — including Ripley’s Believe It or Not Museum.

Education and colleges are a large part of the history of our area. Visit beautiful Flagler College, St John’s River Community College, First Coast Technical Institute, University of St. Augustine for the Health Sciences and the Florida School for the Deaf and Blind.

Learn About the History of the Bayfront Marin House 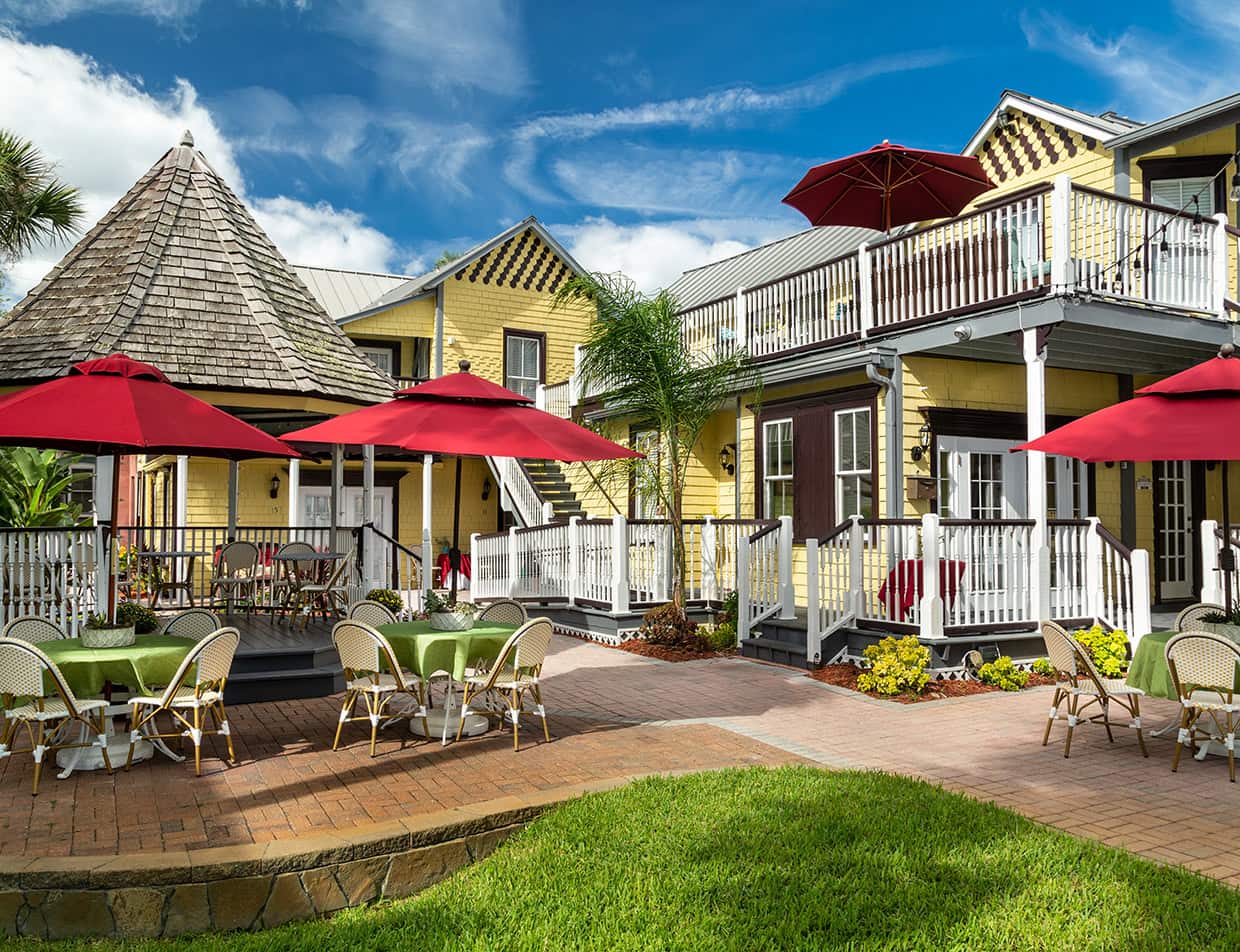 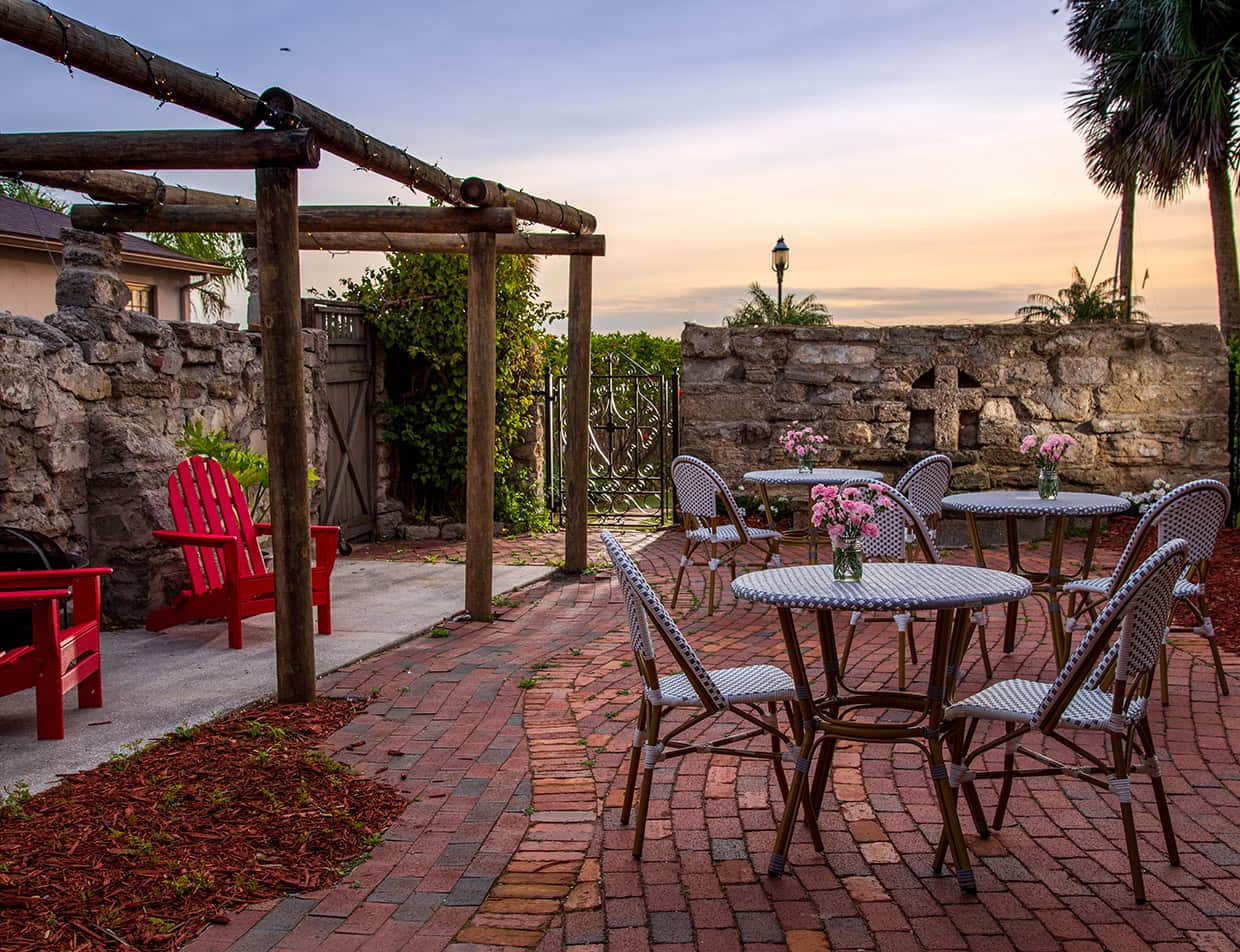 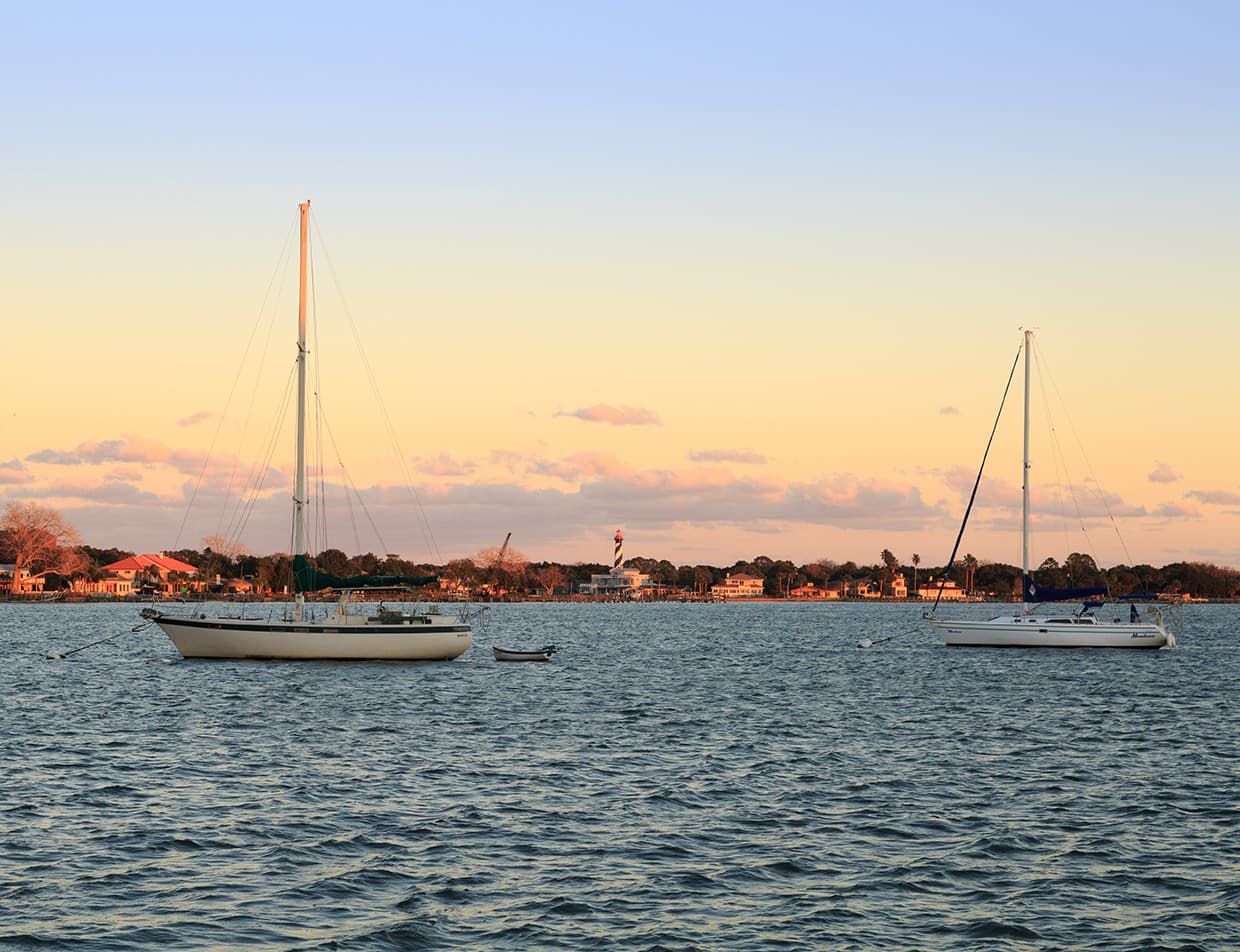 The First Appearances
The first notice of a house on the property that is now home to our hotel in St. Augustine is in the Roque map of 1788, which shows a wooden building in bad condition. Francisco Marin, one of the members of the Minorcan colony who had taken refuge in St Augustine, acquired the house and lot in the 1780’s. The conditions finally being met, Governor White gave the title of the lot to Francisco Marin, Jr. in 1806.

The colonial house at 47 Marine Street (the rear section of the front lot at 142 Avenida Menendez) dates from the Second Spanish Period. It clearly shows the effects of the early regulations laid out by a royal ordinance issued by the King of Spain in 1573. It decreed that in hot climates, the streets should be narrow, and that: “All town houses are to be so planned that they can serve as a defense or fortress against those who might attempt to create disturbances or occupy the town.” The house at 47 Marine Street is built right to the street line, with masonry walls extending north and south from the facade, as if to enclose a compound. Entry is not from the street, but rather through a door on the south side (which is now the entrance to The Francisco Marin Room).

Moving Towards the Future
Captain Henry Belknap came to St Augustine as guests of the Alcazar, but fell so in love with the town that he bought the Victorian Cottage that stood at 142 Bay Street (now Avenida Menendez). This beautiful home was once named the Hopkins Cottage for its prior owners. Captain Henry also purchased a cottage owned by Andrew Burgess in 1893, that was located just north of the Marin house, moved it east on the lot, and attached it to the back of his own home. Quickly thereafter, he bought the remodeled coquina Marin house and began to make wooden additions to it. Thus three houses, ranging in time from the colonial period to the Flagler era, combine to make the current rambling structure, long a St. Augustine landmark.

After the death of Captain Henry in 1909, the rambling building was sold to John Cambell, who transformed the once single-family residence into modern apartments or flats.

In 1932, the building was sold to Beulah Robinson Lewis of Virginia, who kept it in her family until it was purchased by the Graubard and Stacklum families in 1988. The apartment building was remodeled and operated as The Villas de Marin, a collection of short-term rental units for 14 years. The house was most recently converted into the magnificent Bayfront Marin House: Bed and Breakfast Inn, which was fully restored and open for business in July of 2003.

The original Hopkins Cottage is today made up of the King George, Marie Antoinette, Hopkins Cottage, Bridge of Lions, Robinson Lewis and Captain Henry.

Soak Up the Area's Rich History

Step Back in Time in St. Augustine

As history recounts, the mainland of the North American continent was first sighted by the Spanish explorer Don Juan Ponce de Leon on Easter, March 27, 1513. He claimed the land for Spain and named it La Florida, meaning “Land of Flowers”. Between 1513 and 1563 the government of Spain launched six expeditions to settle Florida, but all failed.

The French succeeded in establishing a fort and colony on the St Johns River in 1564 and, in doing so, threatened Spain’s treasure fleets which sailed along Florida’s shoreline returning to Spain. As a result of this incursion into Florida, King Phillip II named Don Pedro Menendez de Aviles, Spain’s most experienced admiral, as governor of Florida, instructing him to explore and to colonize the territory. Menendez was also instructed to drive out any pirates or settlers from other nations, should they be found there.

When Menendez arrived off the coast of Florida, it was August 28, 1565, the Feast Day of St Augustine. Eleven days later, he and his 600 soldiers and settlers came ashore at the site of the Timucuan Indian village of Seloy with banners flying and trumpets sounding. He hastily fortified the fledgling village and named it St Augustine.

Utilizing brilliant military maneuvers, Menendez destroyed the French garrison on the St Johns River and, with the help of a hurricane, also defeated the French fleet. With the coast of Florida firmly in Spanish hands, he then set to work building the town, establishing missions to the Indians for the Church, and exploring the land.

Thus, St Augustine was founded forty-two years before the English colony at Jamestown, Virginia, and fifty-five years before the Pilgrims landed on Plymouth Rock in Massachusetts – making it the oldest permanent European settlement on the North American continent.

Experience the Charm of Europe on the Coast of Florida

Without the courage, perseverance and faith of its early settlers it is doubtful that St Augustine would have survived.

Finally, after the British established colonies in Georgia and the Carolinas, Spain authorized the building of a stone fort to protect St Augustine as assaults from the north became more frequent. The Castillo de San Marcos took twenty-three years to build but, once in place, stood as the town’s stalwart defender. Major attacks were made against her in 1702 by Governor James Moore of South Carolina and in 1740 by General James Oglethorpe of Georgia. Neither siege was successful, however, and to this day, the fort has never fallen to enemy attack.

It was not until 1763 that Spain ceded Florida to England in order to regain the capital of Cuba, ushering in twenty years of British rule in Florida. This period in history coincided with the American Revolution, during which Florida remained loyal to the Crown. In 1783, under the Treaty of Paris, Florida was returned to Spanish rule for a period of thirty-seven years. The Spanish departed for the last time when Spain sold Florida to the United States of America.

At a colorful military ceremony on July 10, 1821, US troops took possession of the territory and Spain relinquished control of Florida forever. Soon after the American occupation, St Augustine suffered a series of setbacks. In 1821, a yellow fever epidemic brought death to many newcomers. Also, uprisings by the Seminole Indians culminated in the Seminole War of 1836, which called a halt to development of St Augustine’s economy.

In 1845, as history records, Florida became the twenty-seventh state admitted to the Union. The Castillo de San Marcos was renamed Fort Marion in honor of a Revolutionary War hero, and the capital of East Florida was moved from St Augustine to become part of the state capital in the new town of Tallahassee.

The town had finally begun to prosper when the American Civil War broke out in 1861. Although Florida had seceded with the rest of the Confederacy, St. Augustine was occupied by Union troops throughout most of the conflict. When the war ended in 1865, the town was three centuries old. The war’s end brought speculators and land developers to Florida along with the beginnings of the visitor industry.

In the 1880’s, the sleepy old Spanish town began to bustle with the arrival of Henry M. Flagler, who developed the town as a major resort for the leisure traveler. It was during the Flagler era that the minds of St. Augustine residents turned to the leisure life. North Beach and Anastasia Island were explored and quickly became popular destinations. The St. Augustine Golf Club operated a golf course on the grounds of the fort, and buses transported guests from the Hotel Ponce de Leon to another golf course north of town. Yacht racing became another popular winter pastime, as overseen by the St. Augustine Yacht Club.

Flagler’s vision would forever change the face of St Augustine, but natural disaster also altered the town’s appearance. In 1887 and 1914, fires wiped out many historic buildings between the plaza and the north city gates.