She Knew You Way Back When
Bayfront Marin House
St. Augustine, Florida
Availability 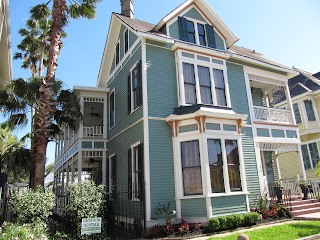 As some of you may know, the hub and I restored a house in Galveston Texas a couple of years ago. (And by “restored”, I mean we bought a house in good shape, watched it fill up with nine feet of water during Hurricane Ike, and then “restored” it to its original good shape. With a couple of upgrades like a new kitchen and awesome draperies).

Earlier this week, I got a call from Marschall Runge, of North Carolina, whose mother grew up in the house. He just happened to see the house and wanted to see if there was any way they could walk through it (we rent the house and have a sign in the front yard advertising that fact and telling folks how to reach us).

It just so happened I was in Texas this week. While they were there. Which gave me the magical opportunity to walk through the house with people who knew it “way back when.” 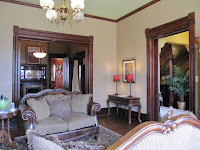 Gretchen Herrmann Runge is a beautiful woman, with striking white hair and a face that lights up when she has the chance to share a story. She lived in the house in the 30s, and moved out in 1947 when she married. She said those nuptials in my living room, facing the bay windows. The room had a window seat then (the hub and I have talked about putting one there!).

The reception was in the room that’s now the library/downstairs bedroom. “We didn’t want a lot of people,” she told me. And I laughed, because I said the same thing when I got married. I think the reason that a lot of brides and grooms are nervous is because they don’t know half the people in the room. 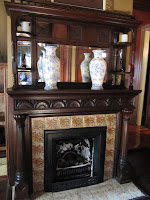 Gretchen also told me that the fireplace tiles in all of the fireplaces downstairs (there are three) had all been replaced since she lived in the house (there are two tiles in the dining room that show signs of the zodiac–those are the only original ones, she said). This may not be an interesting detail to my readers, but it was huge for me. After Hurricane Ike, many of these floor tiles cracked as the water seeped out of the house. I was heart-broken that they had been destroyed on my watch, so I haven’t replaced them. Now that I know they’re imposters of the originals anyway, I feel much better about tearing them out. But that’s a job for another day.

Mrs. Runge’s father, George Herrmann, sounds like quite a card, as they used to say. He called the house “The Herrmanntage”, like Andrew Jackson’s Hermitage in Nashville.

George was married to a woman named Anna. I didn’t know Anna, of course, but in 1981, when the house was on Galveston’s Tour of Homes, Anna was quoted in the tour’s guide book: “The house is home to my children,” she said (one of those children was my new friend Gretchen!). “At Christmas they were laughing about the time I came home to find them sliding down the steps on my cookie sheets. I sat down on the last step and used my shoe on them…it was a happy home.”

I have a copy of the guide book in our kitchen, so that guests can see the “before” pictures of the house (it was the Renovation in Progress in 1981, then was back on the tour in 1999 as a finished piece). I’ve always showed visitors that quote because it cracks me up. 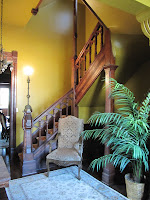 Gretchen was a lady who paid attention to details. Here are just some of the other things she remembered about the house:

Her family bought the house in 1933 from Mabel and Violet Keiller, the daughters of the previous owner, Dr. Keillor, who passed away in 1931. There is a state historical marker in front of the house about Dr. Keillor, even though Gretchen’s sons–Marshall and Val, who accompanied her on the trip this week, along with additional family members–said they always thought that Gretchen’s father, Dr. Herrmann, was a more impressive doctor. (Dr. Herrmann was  a cardiologist at UTMB, and was a pioneer in the field. He stayed at UTMB–and at 1409 Market Street–until 1973, when he entered private practice with his son in Del Rio).

While I’m on a doctor’s visit: a quick note about Dr. Keillor: Gretchen says he had tuberculosis (there is no mention of that on the historical marker, so that was news to me. Note to self: wash hands). The doc had an incinerator in the house that he used to burn things that he touched. Gretchen’s parents finally took it out a few years after they moved in. 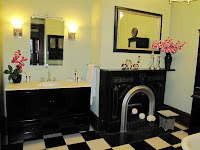 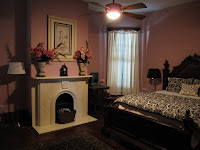 When Gretchen was a girl, the upstairs master bedroom and bathroom were actually two separate bedrooms (which explains why there is a fireplace in the bathroom–it used to be a bedroom. Another suspicion of ours confirmed). They were separated by pocket doors, and the kids slept in the front room, and her mother slept in the second room. Her father, who apparently snored, was banished to a bedroom down the hallway (now our pink room).

There was a back staircase that led from a small covered downstairs porch (now part of our kitchen) to the upstairs bathroom. It was for the help to use. Gretchen says her family always had one or two people working for them, coming in every day except Saturday to help her mother with the meals and cleaning. She says that during the Depression she suspected that they came more for the free food than for the small amount of money her family paid them.

She says she was particularly close to an African American woman named Serena, who was just a tiny thing (she held her open palm about shoulder height as she told me that). I should point out here that Gretchen wasn’t that tall herself. 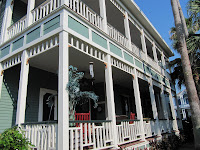 Speaking of that staircase that isn’t there anymore, Gretchen said that her mother loved ferns and had a whole bunch of them hanging on the first floor of the porch (underneath the staircase that led upstairs). They had a cat, too, named Susquehanna, that liked to hang out there. (We have an orange cat that is not ours but hangs out there anyway. We call him Sunset. He may be a descendent of Susquehanna for all I know). The two photos at the left show what the downstairs porch looks like today. 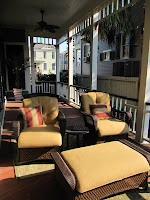 By the time Gretchen moved out of the house, her parents had decided to enclose the small front porch upstairs (the house has a lot of porches) and turn it into a bathroom (it’s since been turned back into a porch. And the cycle continues…) She said the paper boy liked to throw the paper on that upstairs porch, and her Dad just went out there to read it every morning.

Gretchen told me that in the forty years her parents owned the house, they never had water in it. That makes me feel good, and makes me hopeful that Ike truly was a 100 year storm. Of course, they did have water from above: after a strong storm, the ceilings in the living room and library collapsed. They had been incredibly ornate ceilings, made of Italian plaster.

The ceilings may not have lasted, but a lot of the other details have. And that’s something of a miracle in itself. Much of the woodwork in the home is intact, and a lot of it is rare curly pine. When we bought the house, one of the Realtors told us that another couple had looked at it (allegedly–I seldom believe anything that Realtors say) and the wife said she would lighten the place up by painting the woodwork. He said he escorted them out of the house right then (allegedly). 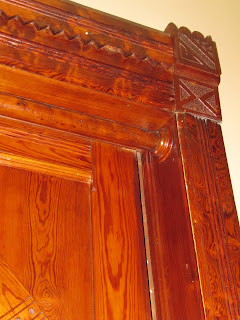 After surviving this unnamed couple, much of the woodwork was torn out of the house by the gorillas that ServPro employed to clean the house after the storm. They just threw it on the sidewalk like it was  just another wet disposable item from the house. Thank goodness our friends (who stayed on the island during the storm, a little adventure they have sworn that they will never ever do again) walked by and yelled at the gorillas, then carried all of the wood back into the house (well, everything except the pile that another neighbor STOLE and MADE INTO BOOKCASES. And yes, he told me about the bookcases himself).

Anyway, according to Gretchen, a lot of the house is intact. And that made me happy.

I know a lot of times my blogs go to the snarky side. There is no snark here–other than the references to the bookcase bozo–and it’s because I truly felt lucky that I was in town on the right day so that I could meet this wonderful, story-filled woman.

Thank you, Gretchen! It was wonderful talking to you!!! 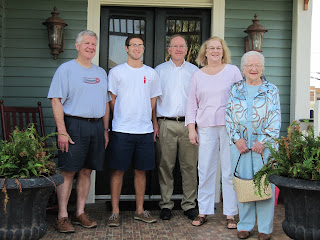 (Shown in the photo: Gretchen Herrmann Runge, on the right. Then, from the right, it’s Val (who works at UTMB), John Runge (Gretchen’s Grandson, who was on his way to college in Austin) Marschall and Susan Runge (Gretchen’s son and daughter-in-law).