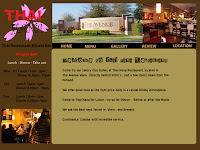 A couple of weeks ago, the hub mentioned to me that if he had only ever eaten Thai food in Florida, he would not like Thai food.

We’ve had some pretty bad Thai-ms since we’ve moved here. Which is a big darn shame because the hub and I love a good drunken noodle, a spicy dish of Pad Prik King.

So imagine our excitement when we saw a sign go up on Route One a couple of weeks ago: THAI HANA 2: COMING SOON. The restaurant is about 5 minutes from our house…in a real Thai emergency, we could walk there.

The restaurant opened last Friday night, and we were right there. Along with about 100 other people. The very nice hostess said that she could seat us, but it would be at least an hour before we could eat.

We left with mixed emotions..disappointment, of course, because I cannot eat dinner after 9:00 at night, and it was already after eight. But also pent-up excitement. The huge crowd of people surely were there because they were familiar with Thai Hana 1, we said in the car. It must be excellent, we enthused.

We went back last night. The parking lot was substantially less crowded. But it was a weeknight, so we didn’t take that as a bad sign.

The restaurant was welcoming, lined with booths and a nice mix of dark wood and a light space. The only odd part was the “theater” seats at the front of the restaurant. I understand that some folks like to watch the sushi artists make the rolls, but these seats and tables are about 15 feet away from the kitchen. So all they were really looking at was us. And worse…we were looking at them. I wouldn’t want to sit there.

Before I get to the food, I have to mention the staff at the restaurant. As we were ushered to our booth, no less than four people welcomed us and thanked us for coming. The hub and I looked at each other–if the food was half as good as the staff, we were going to be Very Happy in a couple of minutes.

We started with a bowl of Tom Yum and one of Tom Ka. These soups are kind of the canary in a coal mine for us…if they’re not good, the meal will not be good either. If they’re excellent, the canary starts to sing.

My Tom Ka was good, but the Tom Yum was not completely yum. It was, in fact, a little bland. It didn’t taste like lemon or tomato, or anything else really. It tasted like broth.

But not so bad that the canary was dead. He was just coughing a little.

We headed further down into the mine shaft.

We ordered two dishes: the first, Hot Basil with chicken. It sure sounded like Pad Prik King to us, although our waitress wasn’t sure. The menu promised green beans, basil leaves, snow peas, and a very spicy sauce (it had the little asterisk next to the listing, in case we didn’t notice the word “spicy” in the description).

The second dish was a house special, Pad Thai with lobster. We don’t usually get Pad Thai because it’s too pedestrian. But, given the amount of almost inedible Thai food we’ve had in the last few months (we had a Pad See Ew last week that is still coagulated in my stomach), we thought playing it safe might be in our best interest. And the idea of lobster mixed with noodles sounded pretty good.

The Pad Thai wasn’t pretty good, but it was okay (which is really good, if you’re grading on the Florida Thai Curve). It didn’t taste like Pad Thais we’ve had in the past, but we soon adjusted to the taste and were happy with the firmness of the noodles, and the very small amount of peanuts (they were what they’re supposed to be–an accessory to the main event). And who could say anything bad about the lobster…there was a ton of it, with big pieces of claw meat (in several instances, it was the whole claw).

We both decided that we didn’t love it, but we could eat it again.

The Hot Basil, however, was a huge disappointment. It wasn’t spicy (no asterisk required); in fact, it really didn’t have much taste at all. If it tasted like anything, it had that vague stale taste of those tiny ears of corn. Now there are people who love those, and they might love this. But anyone who ordered the dish because it was purported to be spicy is going to be wondering if they have suddenly lost their sense of taste.

All in all, we’re definitely not going to race back there. But we’re not going to avoid it either. The other day I met a man who moved to Florida from New York. He said that, once you’re here a while, you start to forget how good the food used to be at home. You begin to lower your standards.