This weekend, I started packing up some of my things from our Victorian house in Cape May.

I know–even before I write this blog–that this post won’t technically be about historic travel, unless you include traveling down memory lane. Which I am. Because it’s all that I can think about.

We bought our vacation house in 2001. It was pretty run down at the time. Like, so run down that when we told the hub’s parents to take a look at the house (along with their contractor friend Mr. Mark), they not only looked at it, they made a list of three other properties that were for sale that we should buy instead.

“Run away from that house,” their contractor friend said.

Have I mentioned we’re not much for taking advice?

We bought the house (obviously), and started what would become a routine for the next 18 weeks.

We patched, and painted, and called every contractor in the phone book (and quite a few that were not listed anywhere officially, their phone numbers whispered surreptiously in the dark corners of Swain’s Hardware like deeply held secrets). After working for 47 hours straight, we’d hop (and by hop, I mean drag our battered bodies across the lawn) in the car on Sunday night and drive home.

Creatures of routine, we always stopped at the halfway mark (76.3 miles), a nice WaWa with a clean bathroom. The WaWa (I just love saying that) was still in New Jersey, which meant we could live large and sit in the car like ex-Presidents while someone else pumped our gas.

We liked sitting in the car, because–when we went into the WaWa to use the bathroom–it took us 5 minutes to get out of our vehicle and try to stand mostly upright to walk into the store (and by walk, I mean drag ourselves through the parking lot).

By the end of 18 weekends, we no longer did a bathroom break. I would have rather peed on the car seat than tried to move my screaming muscles if I didn’t have to.

That was nine years ago, although I still remember it like it was just last year. A lot has happened since then, but the biggest thing happened on February 3.

That day, we got an offer on the house that we couldn’t refuse. We tried to refuse it. But the interested party just took that as negotiating. Eventually, we signed a contract.

And then the crying began.

As my husband says, there are a lot worse things that could happen to us. We know that in a world full of earthquakes and soaring cancer rates and unfortunate civilian deaths that this is on the low scale of tragedies.

But we are sad. Very, very sad.

Getting the house ready for the new people (we hate them, incidentally, and call them the people who stole our house), packing up our things…I’m tearing up just thinking about it.

So, as therapy (or something), I thought I’d tell you a little bit about our renovation experiences. Because we may not own the house, but no one can buy our memories.

I’ll start with an after picture: 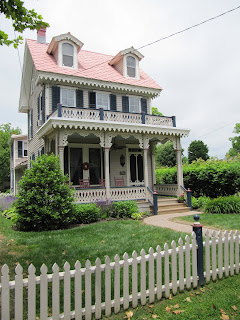 Check back for the befores, along with a funny story about the time we realized that sewage was slowly filling up our crawlspace.