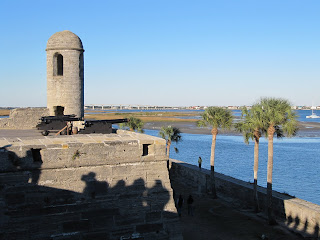 Today marks the third day of festivities for St. Augustine, Florida’s 445th birthday celebration. (Note: if you haven’t made your reservations yet for the big bash in 2015, you might want to book a room at https://www.bayfrontmarinhouse.com/.)

St. Augustine was officially declared a city on September 8, 1565 by Don Pedro Menendez de Aviles. That makes it the nation’s oldest city.

It also makes it the nation’s most European city. The hub and I started coming here a couple of years ago, when the Euro was so strong that we could no longer afford to buy a Toblerone bar in Charles de Gaulle airport. Saint Augustine, on the other hand, was very affordable. At one of our favorite restaurants–The Columbia–you can get two great entrees and a pitcher of sangria for around $55. It’s just like being in Spain, although the traffic is about 400 times better.

Speaking of food, there’s a long history of great eats in this town. Long before the Pilgrims sucked up to the generous Indians in Plymouth Rock for a free meal, the Timucuan Indians had already invited the Spanish settlers of St. Augustine over for a dinner. Today, the last day of the birthday shenanigans, the St. Augustinites celebrate that tradition with a 16th century cooking contest.
In fact, I’m headed over there now. I’m not sure what 16th century food was like, but I’m hoping that there will be birthday cake at the end of the buffet.