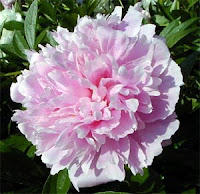 If one more person asks me if I garden because it’s relaxing, I am going to jump up off my cushioned knee protector (and by “jump up” I mean that I will hobble to a fairly-straight and upright position, groaning the whole way), ball up my little fist (little, of course, is relative, as presently my tiny hands are swollen to man-size with my latest outbreak of poison ivy), and stamp my left foot (because my right foot still hurts from when I stuck a shovel in it trying to remove a stump from the front yard).

Do gardeners look as if they’re relaxing? The sweat dripping down our faces, staining the inside of our cute gardening hats? The muddy knees, imprinted with grass stains and small pebbles? The sheepish trips to the emergency room, where we are forced to admit that the gouge in our shin/branch in our eye/infected poison ivy was self inflicted during a moment of relaxation!!???

Now, I have no doubt that there are *some* people who find gardening relaxing.

For instance, I don’t know a lot of inmates, but I would assume that if you asked someone who doesn’t see sunlight much of the day if they would like to pull ivy off the side of your house, they would probably say yes and even smile as they said it. (Watch your purse, of course). 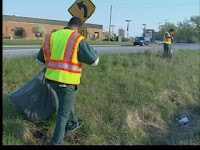 And they look pretty relaxed when they’re standing on the side of the road, picking up trash (which doesn’t sound like gardening unless you live on a busy street in suburban Baltimore like I do).

But, honestly, what isn’t more relaxing than worrying about how to hold onto that slippery bar of soap? (Okay, maybe I’ve watched too much cable…but you see my point).

Another population that seems to like to garden is retired people.

Because I know more retirees than I know inmates, I’ve actually done some research on this. There are three hobbies among the “every day is Saturday” crowd: going to the grocery store, visiting the doctor, and putting on some decades-old dirty gloves and puttering around with a hose and some pruners.

Now that I think about it, old people do look like they enjoy the latter activity. It might even provide a relaxing break for them from the mentally tiring gymnastics of Sudoko, and trying to figure out why their Medicare co-pay went up last month.

Of course, I don’t think I’ve ever seen any of them sweat while they’re puttering in the garden. So maybe they’re not doing it right.

Because I think I’m doing it right and I sweat like Tom Sizemore on Celebrity Rehab. 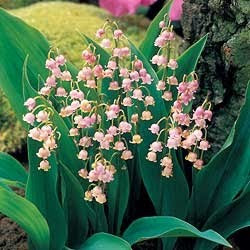 I’m thinking about adding a sign to my front yard. Right in the middle of the pink lilies of the valley: “This garden is maintained by just one woman…doing the work of ten…for the benefit of thousands.” (Okay, full disclosure: I stole the motto from my friend Jim Belfield of Virginia. He, however, says “man” instead of “woman” so I don’t think I owe him a licensing fee).

How did I become so crazy? Because I’m pretty sure that I seem laid back to my friends, who would never guess that I’m half insane on weekends trying to grow roses that are bigger than theirs, hedges that are denser and perennials that are more colorful.

As with most things (my bad knees, my upturned nose), I blame my family. My grandfather, on my dad’s side, kept a notebook of his plants and fields. After he died, we found it in his desk. A typical entry would be: April 29, 72 degrees. Sunny. Five flowers open on the purple gloxinia, 2 buds.

Later, in the summer, his entries included garden records. How many pounds of potatoes he harvested. How many pumpkins were on the vine. He recorded the current year’s numbers, then flipped to the front of the book to compare the results to last year.

Good grief, I realize now that Pappy was so competitive that he had to compete with himself. No wonder that I am the way I am.

I need to get a copy of that notebook. I bet I can beat his numbers.

At least I can try. While I’m relaxing.