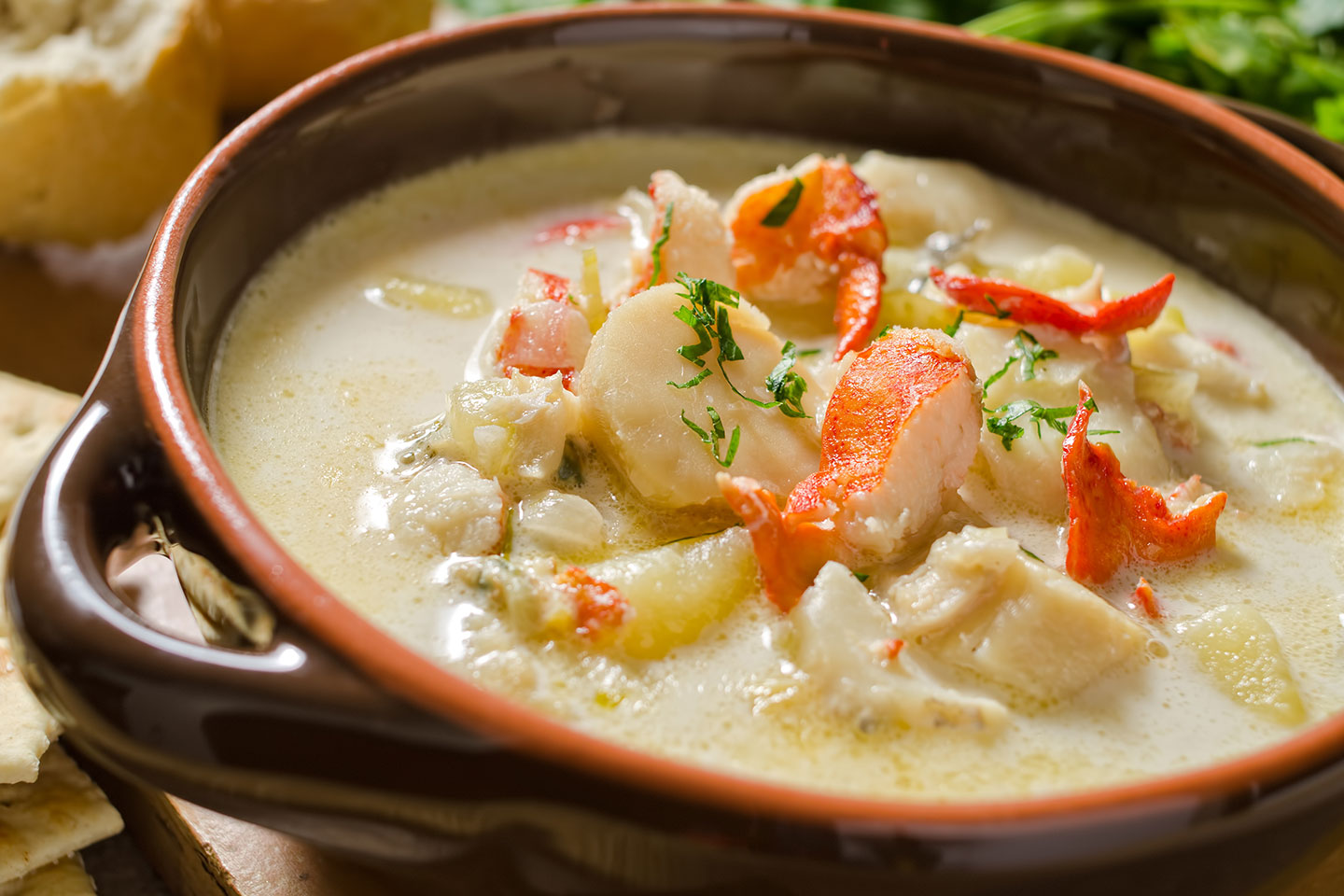 I travel frequently for my “other” job. Sometimes, I’m on the road for a week, then home for a night (just long enough for two loads of laundry), and then I’m out again for a week.

So I know what it’s like to eat out a lot. It’s awesome, usually…until one day it isn’t. Your tummy just doesn’t feel right. Or maybe you woke up with a sore throat (you knew that guy next to you on the plane wasn’t just sneezing from allergies like he said). Your head hurts. You had a huge breakfast (like maybe our famous french toast?) and you just want something small.

Whatever the issue, you want a nice simple meal. Maybe just a bowl of soup.

Well, I hear you. And I’ve put together a list of great places to get a bowl of soup here in St. Augustine. Here are my picks: 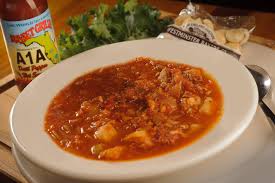 1. Minorcan Conch Seafood Chowder at Sunset Grille (famously located, as per their t-shirts, “Somewhere on A1A”). The Minorcans were the original settlers in St. Augustine, and as a general rule, when a dish is called “Minorcan” it generally has a good bit of datil pepper (a locally grown hot pepper) in it. This chowder is not overly hot, but there is a little spice burn on your lips when you’re done eating. The conch is just a little chewy, and there is a good amount of potatoes, onion, celery, and tomatoes in the stew to make it a perfect cool-weather choice. 421 A1A Beach Blvd. 904.471.5555.

2. Chicken soup with rice at the Spanish Bakery. Earlier this year, the Spanish Bakery closed after 30-some years of making the best homemade bread in town. I will tell you, my stomach started hurting just at the thought of it. Luckily, a few months later they were back, with a new lease, and a newly refurbished building. One thing that wasn’t new was their awesome chicken soup with rice. It was just what I needed to settle my stomach (that, and a few thick slices of their amazing bread. Go to the bakery and try not to order a few of the freshly baked loaves.Go ahead. I dare you.) When you’re not feeling well, and chicken soup is what you want, Spanish Bakery is where you want it. 47-1/2 George Street. 904.342.7859.

3. She crab soup at Harry’s. Now, this is not your go-to dish if your tummy is a little sensitive. This is soup for cold days, for people who love the rich taste of a super thick and creamy concoction heavily laced with crab meat. As a Marylander, I wish that they incorporated some Old Bay into the recipe. But as a transplanted Floridian, I’m totally happy with the fact that they don’t cover up the taste of the crab. 46 Avenida Menendez. 904.824.7765. www.hookedonharrys.com.

4. Southern gumbo at Cap’s on the Water. We don’t pretend to be New Orleans here in St. Augustine, but that doesn’t mean we don’t enjoy a good roux. And that’s exactly how the gumbo at Cap’s is started…with a slow roasted flour and butter that gives the finished dish a rich and complex flavor. Full of seafood, and served with a side of cornbread–this is a dish of yumminess that will fill you up, but still leave room for dessert (and isn’t that what we all like about soup meals, anyway?) 4325 Myrtle Street. 904.824.8794. www.capsonthewater.com.

5. Creamy tomato and basil soup at Gas Full Service. Gas does mom food well–they have great deviled eggs (seriously, where can you go in town if you just have a hankering for good deviled eggs?), burgers, meatloaf, and pie. So it’s no great surprise that their creamy tomato basil soup would be just delicious. So warm and filling–it makes me almost wish that it snowed in St. Augustine, so that I could go and play in it for a few hours, then run over to Gas for some soup. Almost. (Note: although Gas has this soup most days, it is technically a “special”. So call first to make sure it’s on the menu). 9 Anastasia Blvd. 904.217.0326.

6. Chicken tortilla soup at El Potro. Feel a cold coming on? Head over to El Potro for this smoky, chipotle-laced soup. It’s got all the cold-fighting goodness of chicken soup, with the crunch of homemade tortilla strips. And in between, it has plenty of big pieces of chicken, carrots and celery. Be forewarned–this restaurant isn’t fancy. Some of the floor tiles are broken, and all of the booths have slices in the leather seats. But you’re not going for the ambiance–you’re going for the soup (and the homemade salsa–which is spicy enough to open your nose when your sinuses are fighting against you!) 226 San Marco. 904.819.0390. www.elpotrorestaurant.com.

7. Pasta Fagioli at Puccini’s Pizza on Vilano. When you want vegetable soup, with al dente pasta in it for heft, head across the bridge to Vilano Beach and Puccini’s. Thick and hearty, it’s a great soup for cold nights. 85 Ava Way. 904.342.7757.

8. Black bean soup at the Columbia. It’s pretty easy to overeat in St. Augustine–have you even seen the number of restaurants here? But at some point, you have to say “when”. When you do, order a nice bowl of black bean soup and enjoy it with half a loaf of cuban bread (well, it’s the serving size that they give you when you sit down, but it really is about half a loaf). The soup is garnished with a sprinkle of raw onions, and a dollop of sour cream. If you’re eating it as a penace for heavier meals, it’s just as good without the sour cream. 98 St. George Street. 904.824.3341. www.columbiarestaurant.com.