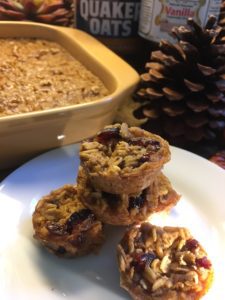 At the beginning of August, I spent a few weeks in Delaware with my mother as she was recovering from surgery.

A couple of things you should know about my mother: one, she has always been an excellent cook and baker; and two, in the past few years she has gotten very involved in the healthy food scene.

As I told a friend of mine recently, my mother puts the “nut” in nutrition. (Note: I said it in a loving way).

Those two personality traits have combined to make a kitchen whirlwind.

I had a lot of great food while I lived with my mother: the juiciest organic peaches, unbelievable homemade bread (made with a flour she imports from England–Einkorn for those of you interested), the creamiest broccoli soup ever, and authentic Maryland crab cakes (okay, I made those…but only because my mother is allergic to shellfish).

One of the things I had that I loved was a baked oatmeal. Mom had made it before her surgery (apparently she doubted my ability to cook for her while she recuperated). She cut it into bars, wrapped it in wax paper, and froze it. To heat it up, she put it in a cast iron pan with a little coconut oil.

While we waited for the cube to thaw on the stove, Mom told me a little bit about her experiments looking for a great hot breakfast that she could heat up and still have it taste like she had made it fresh. Here’s what she learned: baked oatmeal is good, but it is even better if you soak the oats first. Using a combination of steel cut oats and old fashioned oats was best. Also, you *can* put too many nuts on the top (it makes the whole thing hard to cut and it subsequently crumbles).

Since I was staying with her in August, my mom went for a summer slant: peaches and blueberries in one oatmeal; bananas, coconut and pecans in another.

I thought I’d make some myself, since we often have vegan guests stop by the inn. Seeing how my mom just threw any thing in there (she told me she’s also thrown in flax seeds, chia seeds, any kind of nut, strawberries, raspberries, protein powder, etc), convinced me that I could make something seasonal and it would turn out just as well as hers did.

The first choice was easy because it was October–it had to be pumpkin. That meant adding some pumpkin-friendly spices, like nutmeg, cloves, and cinnamon. I had some dried cranberries in the kitchen, so that went in the bowl as well. We serve an awesome organic maple syrup at the inn when we make banana pancakes, so I drizzled some of that in as well. Voila! Autumn in a pan!!

Speaking of a pan, I used two–a 9×13 dish and a mini muffin tray. The mini oatmeal rounds were good, but the larger dish was better because it was moister. You can do either–if you use a muffin tin, especially for minis, watch it so that it doesn’t dry out too much.

And obviously, if you don’t have some of the ingredients, feel free to substitute with aplomb. It really does seem like you can’t mess this up (as long as you don’t add too many nuts).

Here’s what I came up with:

In a large bowl, combine steel cut oats and butter (slice the butter for easy melting). Pour the hot water over the oats, cover with plastic wrap, and let sit for at least 30 minutes.

Whisk pumpkin, milk, and vanilla together til pumpkin is incorporated, and add to oat mixture. Stir in the cranberries at the end so they are evenly distributed. Transfer mixture to a glass 9 x 13 pan. If you’re using nuts, sprinkle them over the top and press in lightly (you should still be able to see the nuts on top).

Slice into squares and serve. If you want to feel like you’re on vacation, and you’re not a vegan, feel free to dollop freshly made whipped cream on top! (A drizzle of maple syrup is nice too).