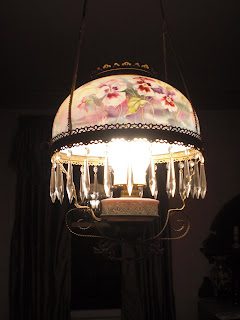 HTG’s mother was an artist. She painted porcelain, which is a very Victorian lady thing to do.

One of the things I loved about her art was that it was beautiful, but exceptionally fragile. One rambunctious two-year-old could wipe out years of work in about 4.7 seconds. (Yes, I’m talking about you, Lukey!)

Porcelain painting has a tough aspect, too. The artist paints the piece, and then fires it in a kiln to about 1500 degrees. The glaze on the porcelain actually melts, and the paint becomes a part of it. The artist then goes through the process again: a little more paint, another firing, another melting and cooling process.

Each of her pieces required a minimum of three firings. To get a really dark color, she could paint and fire a piece 5 or 6 times.

Of course, push the piece too far, and it would melt in the kiln like a three dimensional Dali painting. It was always a sad day when Mom opened the kiln’s lid to find a mess like that in the bottom of it.

All of that is to say that my favorite artists are those artists who know that their art will be fleeting, and that it is somehow fragile in time. Paintings fade, sculptures erode, glass and porcelain breaks.

Maybe that’s why I love the tree carvings that are sprouting (pun intended) up all over Galveston, Texas.

Or maybe I love them because they’re just cool.

A little background: in 2008, Hurricane Ike roared through Galveston (verbiage on a t-shirt I saw there last month: Hurricane Ike: Category Two, My Ass!), creating a huge storm surge in the island’s historic East End. During its visit, it displaced about nine feet of salty water, which sat in the neighborhood for a day or two.

The 100-year old live oaks (ahh, the irony) didn’t like the salt, and many of them ended up dying.

Rather than keep these skeletal reminders of the storm around, most people cut them down and ground the stumps into sawdust.

But some people left about six feet of stump and had them carved into beautiful, transient pieces of art. Because wood, like porcelain, is ultimately fragile, especially when left in the elements.

But transience only makes these pieces more awesome, because you know that you have a limited time to enjoy them. I don’t know how long–maybe 30 years, maybe 5.

So, given the fleeting nature of both art (and life), let’s check ’em out: 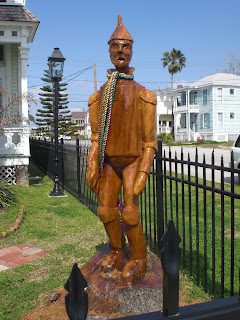 I’m going to start with my favorite. This is my boyfriend, Tinny. He is all decked out for Mardi Gras. If you’d like to visit him (don’t even try to date him, lest I have to get all Angry Lion on you), you can find him at 1702 Winnie.

Why a tin man? Because King Vidor, an uncredited director of the Wizard of Oz, was born in the house. King directed all the Kansas scenes in the Wizard, which are some of my favorite. According to Wikipedia (and they’re never wrong, right?) he also did a film on the Storm of 1900. If any of you have more information on that, I’d be very interested to hear more!

In the meantime, I visit Tinny as much as I can. And I plan to name my next child and/or fish King. Because I don’t think he’d be teased that much in second grade, do you?

King is a great name for a dog, of course, particularly given the kind of treatment that many household pets today seem to enjoy. Here are a couple of dogs that even I could own: they’re cute and they never bark at six in the morning. 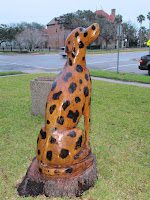 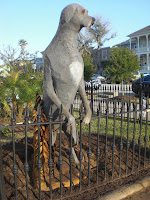 The Great Dane on the left is at 1228 Sealy (he looks like a “King”, doesn’t he?). Some ne’er do well has stolen his left paw since I took this shot…I hope that a dog attacks that person and karma-cly gnaws off his arm as soon as possible.
Spotty, on the right, is in front of the firehouse at 25th and Sealy. He was one of the first carvings that I saw in town, and I still want to pet him when I see him. 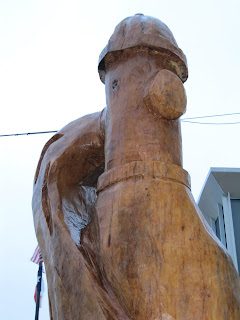 If you’re wondering what Spotty is looking at, it’s probably this beauty next to him on the other side of the firehouse’s lawn: 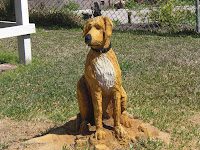 Here’s one more cutie.  He’s so realistic (and so realistically sized, unlike the five and six foot tall nuclear versions above), I almost biked right past him. You can find him at 1820 Winnie, unless he has taken off after a cat, which he looks like he might do any minute. 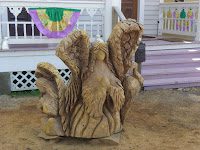 Like art itself, the subject gives you great insight into the artist (or, more likely, into the guy or gal who paid the artist). Like these three angels on the 1700 block of Ball Street. The owner of the house has three little granddaughters…and she’s always called them her “little angels.” 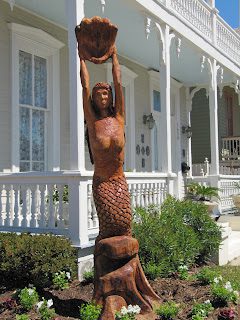 Before I introduce you to Mermy here, I should share a story of shopping for garden art with my husband several years ago. As he walked through the statuary, he threatened to ask the salesperson if there wasn’t anything sexier. This come-hither carving is at 1428 Church, right around the corner from our house, and right up my husband’s alley, as they say.
Incidentally, I’m not sure why she’s holding a catcher’s mitt above her head. But she combines two of the hub’s favorite springtime pursuits–boobs and baseball. I’m guessing the artist may have similar interests, because I know the owner of the house, and she’s never mentioned either of those topics. 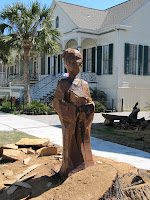 Here are some other chicks that have recently moved into the neighborhood. The Geisha girl on Ball Street isn’t quite moved in yet, but I already know she’ll be a great addition to the historic district. I’m not sure why the owner chose this topic; if I find out (or if you know), post it in the comments. 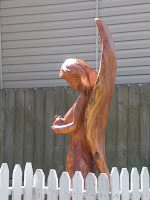 This angel is holding a bunny because the owner of the yard used to be a Playboy model. At least that’s the story that I’ve heard. You can go to 17th and Post Office and decide for yourself.

Galveston is an island, so, as you would expect, there are plenty of people who commemorated the island wildlife in their front yards (there may be many who commemorated it in their back yards as well, but HTG is simply not that nosy. Or that brave). Here are some of the ones I spotted: 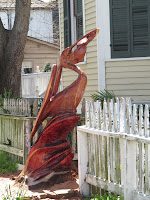 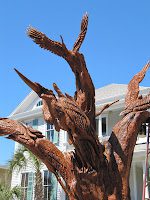 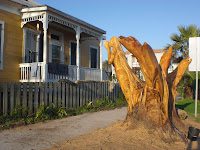 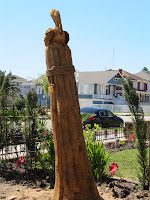 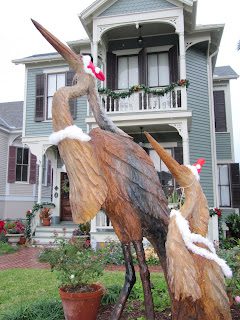 (Visit these guys yourself at 1609 Post Office, 1610 Sealy, 902 Ball [post a new photo if you’d like…these guys were in process when I saw them], 1618 Church and 12th and Sealy).
These are the ones that I’ve found so far…but I know that there are more out there! If you spot them, please pass them on…I want to admire them while I can! They are a true monument to the storm, to art, and to the
importance of living in the moment. Enjoy! (And see this final one at 1028 Winnie). 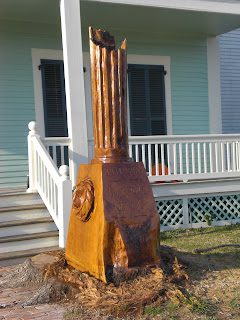