St. Augustine is surrounded by water — the intracoastal, the bay, the ocean. So it makes sense that you’re going to want to try our seafood. Where do we go when we want great seafood in St. Augustine? Read on…

The Best Seafood Around 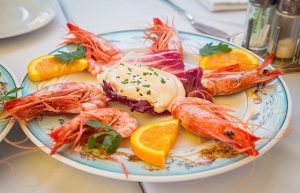 1. Catch 27. 40 Charlotte Street. (Easy walk from the inn). This little restaurant lives up to its name with a menu that’s largely from the sea. Originally opened a few blocks away, they moved to this new space in 2016. The dining room is still tight (note: you will know what your neighbors are eating and most of what they’re saying as well), but it’s clean and hip and has a cool new outdoor space. The local catch is always good, although my favorite is the deviled egg appetizer with bacon jam, topped with perfectly fried sweet oysters. Plus having an appetizer sized meal leaves room for the homemade desserts 904.217.3542.  www.catchtwentyseven.com

2. Cap’s on the Water. 4325 Myrtle Avenue. (On Vilano–driving only) You need to drive to this waterfront favorite, but it’s well worth the trip. The decking, dock and pavilion were completely rebuilt and the building updated after hurricane Irma in 2017, and locals and tourists alike love to go early to watch the sun set over the Intracoastal Waterway. When the sun goes down, the deck is lit with hundreds of little white lights–super romantic. Lots of fresh fish specials, and the tuna over fried spinach is awesome. No reservations; plan on waiting with a drink at the oyster bar. 904.824.8794. www.capsonthewater.com

3. O’Steens. 205 Anastasia Blvd. (On Anastasia Island–driving recommended) Local favorite, and the hour-long wait (and that’s at 6:00 at night!) proves its popularity. Fried shrimp, oysters, and a good Minorcan chowder. No credit cards–so take cash (and a book because the line really is that long)! 904.829.6974 www.osteensrestaurant.com 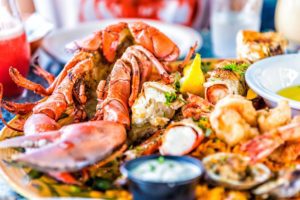 4. Columbia. 98 St. George Street. (Easy Walk) True, it’s not known as a “seafood restaurant”–it’s Spanish. But the Spanish must love fish, because Columbia has some of our favorite seafood dinners. Great tapas, like the Gambas Al Ajillo (large shrimp in a spicy garlic sauce), and amazing entrees like the Grouper Adelita (fish with hearts of palm, artichoke hearts and sun-dried tomatoes), and Snapper Bilboa (fish cooked in a clay dish with tomatoes, onions and peppers) put this restaurant on our list of seafood faves. 904.824.3341. www.columbiarestaurant.com

5. Hurricane Patty’s. 69 Lewis Avenue. (Drive only) A local-favorite restaurant/bar off Route 1, recently bought by the company that owns Pusser’s in Ponte Vedra. They have one of our favorite Minorcan chowders, a fresh raw bar, and Caribbean fish dishes accented with pineapple or mango chutneys. Plus, plenty of great rum drinks, in case you’re interested in drinking like a fish as well as eating one. 904.342.7338. www.hurricane-pattys.com

6. Saltwater Cowboy’s. 299 Dondanville Rd. (Drive only) Did somebody say shrimp? Saltwater Cowboy’s has you covered, with coconut shrimp, stuffed shrimp, shrimp and scampi, shrimp and grits, and a simple dish called shrimp Dondanville (with garlic butter, vermouth, and scallions). Plus soft crabs, crab cakes, oysters, clam strips, and fish. Call ahead seating (up to one hour before arrival). 904.471.2332  www.saltwatercowboys.com 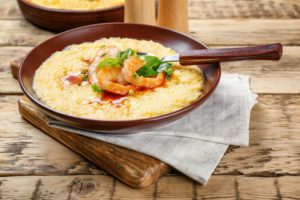 7. Ice Plant. 110 Riberia Street. (Walkable, but also at a trolley stop). When the Ice Plant first opened, it seemed like shrimp and grits was just going to be a special on their always-changing menu. But after scads of people streamed through their doors looking for the dish (along with their great creative drinks!), I believe it’s on to stay. Creamy grits and a ton of shrimp, served in a small black skillet to keep it hot. This version is probably my favorite anywhere in town. And I don’t think that is influenced by my fondness for some of the Ice Plant’s drinks. 904.829.6553   www.iceplantbar.com

8. The Floridian. 172 Spanish Street. (Easily walkable). If you’re looking for shrimp and grits like your momma used to make, the Floridian is not your jive. But if you’re looking for a delicious, modern and creative take on the southern staple, pull up a chair. Picture gently seared grit cakes, cut on the diagonal, with perfect pink shrimp on top. Or really mix it up and get it with the fresh catch. Served with seasonal salsa and herbed feta. 904.829.0655  www.thefloridianstaug.com

9. Aunt Kate’s. 612 Euclid. (On Vilano–driving necessary). Aunt Kate’s got its start in 1990, when Catherine and Frank Usina began serving meals to Henry Flagler’s employees moving building materials back and forth on the intracoastal. And the shrimp and grits at Aunt Kate’s has an old-fashioned, front porch feel–lots of messy gravy, smothering the shrimp and grits. Add a great view, a dash of the restaurant’s homemade datil pepper sauce, and the casual picnic tables, and it’s a great place to sit around and feel southern. 904.829.1105  www.aunt-kates.com 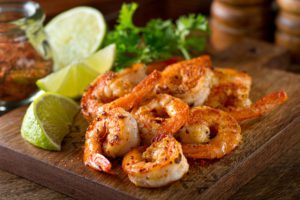 10. Hooked on Harry’s.  46 Avenida Menendez. (Easily walkable). Shrimp and grits started in the Low Country–that’s coastal South Carolina and Georgia. Northern Florida is awfully close to that, and there are plenty of families who say that we do it best. But truth be told, shrimp and grits is such a silky, comforting food, there are lots of other places that do it really well too. Like New Orleans. When you want New Orleans Cajun, you go to Hooked on Harry’s, right on the bay, and just a short walk from the inn. And when you want shrimp and grits, with a little bit of spice, you get their version, covered in a Cajun red eyed gravy. Pair it with a fruity Harry’s Hurricane…ahh, now that’s comfort!!  904.824.7765. www.hookedonharrys.com

Is your mouth watering yet?Join us at our historic St. Augustine bed and breakfast and try some of these for yourself!