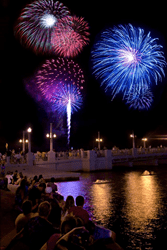 Yes, St. Augustine FL events are a big deal and so is the fourth of July.

There’s a concert in the Plaza de la Constitucion, inside the gazebo. It starts at 6:00 and goes until 8:00pm. Feel free to grab one of our beach chairs and take it with you if you’d like to sit outside and enjoy the music. (Or ask for a beach towel if you’d rather sit on the ground).

4th of July Fireworks start at 9:30, and the “oohs and ahhs” will continue for approximately 20 minutes. The fireworks are set off from a barge located in the Matanzas Bay, right in front of the fort, and yes–you can see them from both the inn (the best viewing is sitting on our coquina wall in front of our lawn), and the beach cottages (you can see them from the street, or walk across A1A and watch them from the park on the water).

Pretty great, right? Well, it gets even better!

It’s Our Birthday Too

Fifteen years ago, the Bayfront Marin opened its doors as a bed and breakfast. Operating for years as the Villas de Marin, an apartment complex (it has been kindly described as ‘tired’), the buildings were in bad shape when purchased by the first innkeeper, Robert Graubard. He fixed up the apartments, turning them into comfortable and luxurious rooms, and furnished the rooms with antiques.

On the first day the inn opened (July 4, 2003), there were 14 rooms. The room that is now Room 16 was still occupied by the former manager of the apartments, Don Devito. It was also occupied by Don’s wife, 5 birds and 8 cats. (They left about 6 months later and 16 was opened as another room).

Robert asked his young daughter Lyndsay and his first wife Janice if they would run the inn for him. They did–and began building a fan base among everyone who came to visit.(You may notice that the Lyndsay Michelle, room 16, is named after Robert’s daughter. Other fun facts: room 12, Stephanie’s Hideaway–was named for his stepdaughter Stephanie, and the Princess Margaret room was named for his business partner Margaret).

Along the way, the Graubards hired some amazing people. They hired Mary Berman, who worked at another of their properties, on day one, and Mary handled the kitchen (she’s pictured below in her Independence Day finery). I’m not sure what order the other people were hired in, but here are the people working when we purchased the inn in 2010: Robert’s brother-in-law Steve, Steve’s Brazilian wife Heloisa, Helo’s fellow Brazilian Claudia, Elizabeth from Hungary, Tatyana from Russia, the amazing baker Donna (whose baking skills were undiscovered until years later), and St. Augustine native Laverne (who knows everyone in town–and probably their parents too!)

You will not find a more talented, friendly, and patient crew anywhere. When we say that they trained us, we really mean it. (And hopefully they think we were at least average students!) 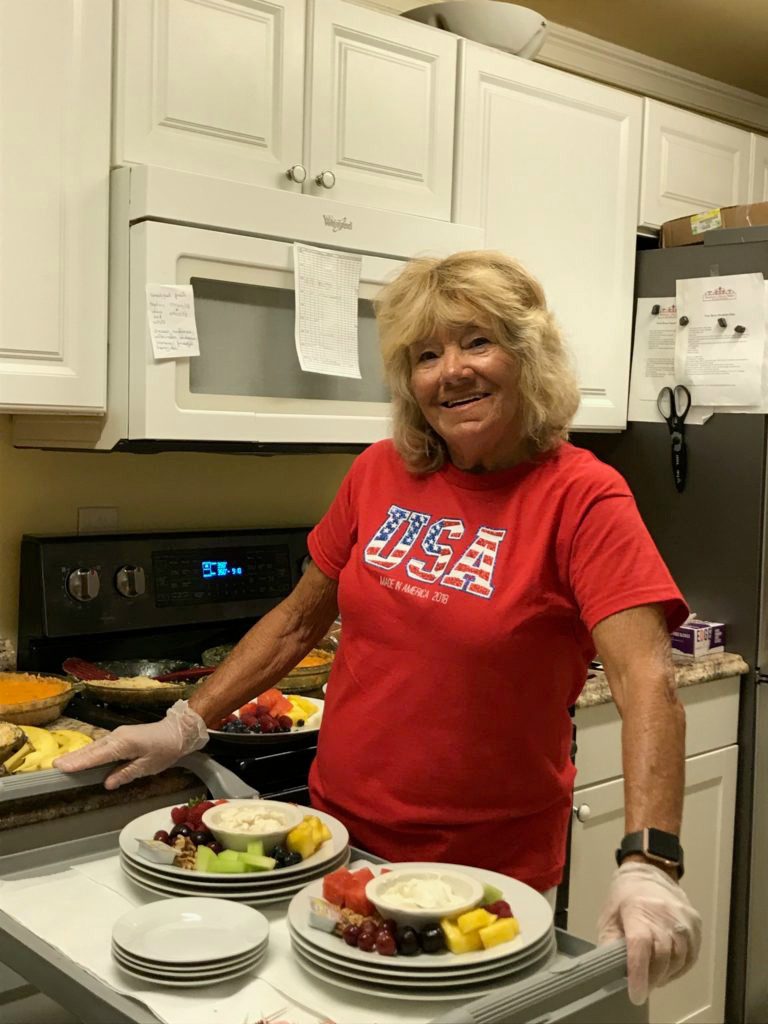 ay, we’re celebrating our 15th anniversary with our current crew–EVERYONE who was here on the day we bought the inn, with the following great additions to our team: Ann, Brian, Carol, Dale, Daniel, Hayley, Jessica, Kelly, Mandy, Marina, our newest teammate Megan, Raeann, and Susie. If you’ve ever worked in hospitality, you know how frequently staff members turn over. We are so lucky to have this amazingly loyal, committed, responsible and just-plain-fun crew.

If you’re in town for the fireworks, feel free to stop by and wish us a happy birthday too! We’re serving Mike’s homemade ice cream tonight around 8:00pm in celebration!

(Note: Later this year, we’ll be coming out with a cookbook in honor of our 15th anniversary. We’re collecting some of our guests’ favorite recipes, some of our staff’s favorites, and some of our favorite photos for a great keepsake of your favorite place to stay in St. Augustine! We’ll let you know when it’s ready!)