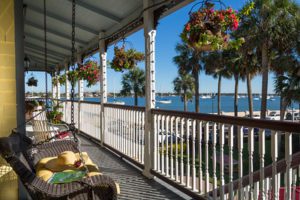 Despite the very dramatic footage from the news, St. Augustine is doing well in the aftermath of Hurricane Matthew (is that called the aftermatthew?)

There are lists of businesses that are open in many areas–check augustine.com or the St. Augustine Facebook page for more information on that. Rather than share a list, I thought I’d give you my overview of conditions here “on the ground”. As you may know, Mike and I think that vacations are absolutely essential–both our guests’ vacations, and our own. So I’ll share what I would want to know, if I were coming to visit St. Augustine.

Let me say this again: I am not saying that this is a definitive list. It isn’t. This is just an overview of businesses that I know and have seen…it is completely dependent on what I’ve had to drive past in the last few days. So here’s my update:

First, the storm. We did not stay, but evacuated town just as we were asked to, so I can’t speak to how bad it was on October 7, during the height of the storm. I saw the same images that you saw–the panicked people “stuck” in the Tini Martini Bar, the bay tide rushing over the seawall and swirling across from the fort, the water pouring from a doorway at Flagler College.

I do know people who stayed, and they painted a different picture from what I saw on television–friends of ours who stayed downtown got just an inch or two of water in their house, and were less than three short blocks from the whitecaps on the bayfront. Our employees, all of whom live outside the evacuation zone, did not lose power until the afternoon of the 7th–almost every one of them told us it was not as bad as they thought.

Of course, I wanted to see for myself.

Today is just five days after the storm, and just three days after the evacuation orders were lifted in some areas. The town is, frankly, astonishing in how well it has bounced back.

I would say that a minimum of 85% of restaurants are open. Few of them were in the way of the water that came over the seawall–most were closed because of minor leaks, a lack of electricity, and the need to clean out their food stores as the electricity was off for an unknown amount of time (unknown to me, anyway. I will tell you that at my house, which is downtown on Saragossa Street, the milk was still good in the refrigerator, so the electric could not have been off for long on my street).

Throughout the week (again, just days after the storm blew out of here to threaten another coastal area), we received emails from restaurants: Collage was open, and Preserved, and the Columbia, and the Floridian. We drove past the Raintree and saw them seating guests outside last night (speaking of outside, the weather has been simply spectacular this week). Mojo’s opened, Burger Buckets, Maple Street Biscuit Company, and Casa Maya; on Vilano, the 180 Grill and Benedetto’s are welcoming guests with their awesome menus.

We just got an email this morning that Mike’s favorite lunch stop, the Blue Hen, is open. A couple of places truly surprised us: The Back 40 Urban Café was open almost before the puddles were dried up, and it floods on that street during heavy rains so we had assumed it would have been damaged badly (it obviously wasn’t). OC White’s, just a block away from us, and their new sister restaurant Chatsworth’s both opened yesterday, and they are right on the bay (the owner shared with us last night that the coquina on the building held back the water, plus his obsessive foaming and taping of all the doors and windows prior to the storm). The Conch House is open for heaven’s sake, on a barrier island and right over the water!

If you come to St. Augustine (and we hope you do), and you get hungry, you will find plenty of places to eat.

I was likewise surprised by the stores that were untouched–Uptown San Marco looks great, with all of their fun stores open: Magnolia Supply, Spanish Dutch Company, DHD Homes, Luli’s, and Juniper Market. I did not see anything there that even suggested a big storm blew through less than a week ago.

They say St. George Street is mostly open, although I haven’t walked up there myself (I need to–but I’ve been pretty busy as you’ll see later). Almost all of the stores at the top of King Street (those nearest the Bridge of Lions) are open, although the restaurants at the bottom of King Street (past the Lightner Museum, such as the Giggling Gator and Flavors) did seem to get some damage. The Ice Plant says they’ll be closed a few days, but they’ll be open as soon as they get everything cleaned up…literally just a few days.

San Sebastian Winery, and Carmello’s, both of which looked to be under 2 feet of water in a photo I saw last week, are both open, and so is Georgie’s Diner, behind them. They must be on a higher elevation than I realized.

Our sturdy fort reopened today–I’m guessing the National Park Service wanted to inspect it all and ensure the safety of its guests before it opened its doors to the public. The Pirate Museum is open, and the Lighthouse, and the Alligator Farm. The Lightner will open tomorrow, as will Flagler College.

If you want to enjoy our attractions, come on over–they’re ready for you.

In terms of places to stay, very very few hotels and bed and breakfasts were affected by the storm. Unfortunately, the Bayfront Marin is one of those that was–we had about 2 feet of water on the first floor of the inn. We are busy cleaning up and replacing furniture–and expect to be open on October 24. Our neighbors, the Westcott House, got damage as well (we will both need to learn that foaming and taping technique from David White before the next threatening storm).

In better news for us personally, our beach cottages were completely unscathed (well, that’s not exactly true–a window blew in on our orange house and allowed some rain damage in the stairway, but that was fixed this afternoon; we lost 2 boards–just 2–on the pier leading from the yellow house, and that was fixed as well; and it looks like my variegated hollies and my crotons did not like having wet feet, and they may give up the fight). Seriously, almost nothing at all. You can see where the water came up in the dunes, and we are blessed that it stopped there. There is literally a telephone pole in the dunes in front of our Royal Palm and Dunes suites…if the water had pushed that into our building, I suspect I would have a different update for you on at least that house, and maybe others.

We know that we’re lucky. The most damage from the storm was to some neighborhoods, particularly on the barrier islands. You’ve seen photos of the houses clinging to about 5 feet of sand beneath them. They are on A1A on Vilano, further north from our cottages. Other houses that were badly damaged were on Porpoise Point and the areas just on the other side of the Bridge of Lions. Our heart breaks for our friends who live there, and we don’t want to diminish their loss at all as we detail parts of town that were luckier.

Businesses on the bayfront took some damage–both downtown and on Anastasia Island. In addition to ourselves, there was water damage at Harry’s, Tini Martini bar, and Michael’s Tasting Room. Across the bridge, Blackfly, Gas, and Hoptinger’s are cleaning up. (But Mellow Mushroom, just down the road, is open. It really did depend on small differences in elevation).

Everything I’ve seen from those businesses suggest they are working like dogs, and I have no doubt that they will be open soon. We’re only 5 days after the storm–they’ve gotten a ton done already.

There are some big branches down throughout town, but the city is doing a great job cleaning them up. When we returned on Sunday, there were lots of huge branches on the sides of the street–the city picked them up already. Now, there are secondary (slightly smaller) piles of debris…I’m guessing that people have had time to clean their back yards now, and that’s what I see on my errands.

Street sweepers seem to be running all day–the streets are amazingly clean. I wish that they had done that in Baltimore when I lived there–I would have just raked my leaves into the street every fall!

So…that’s my rambling, completely personal view of the city. We have guests staying at our beach cottages (lovely guests, I should add, who brought tools and workclothes to help us clean up! I will have to write another blog about all of the people who have touched me and made me tear up the last week). Anyway, they mentioned to me this morning that they were shocked at how good things look in town. I added my disbelief–if all I saw was the footage on television, I would have assumed that St. Augustine was in far worse shape.

Like I said, look for more official lists of businesses open at the St. Augustine Facebook Page, or at www.staugustine.com. Or, if you have a question about something specific, let me know and if I can drive by on one of my trips to Home Depot, I will check it out!