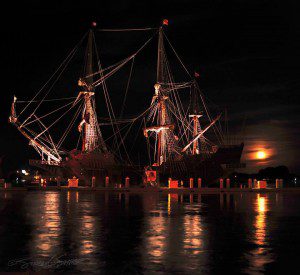 Now the hub can relax.

Well, not really, because he’s crazy busy. Which is why he still hasn’t gone to see El Galeon, the 170′ wooden galleon docked in the marina.

He has a great view of it from the inn, but he wants to go on board. First, the ship was going to stay through June 9. Then June 23. Then July 8. And now this morning the St. Augustine Record announced that it would be making St. Augustine its home port through 2015 (for the 450th anniversay of St. Augustine).

THAT should give him plenty of time to see it…but we still want to check it out sooner rather than later.

Hope to see you there!

(Note: If you love the photo, it was taken by the amazing Stacey Sather. You can buy the print from her at Tour St. Augustine, across from the Lightner Museum).