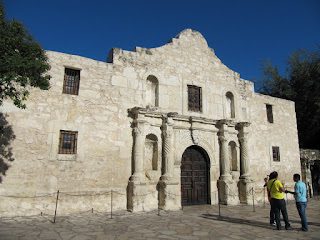 It’s not fun to have a memory deficiency. I don’t know if it’s a sleep deprivation thing, or a pre-menopausal thing, or if it’s just…

Wait a minute. What was I talking about?

That’s what it’s like now around the Wieber Ranch. I’m constantly walking into a room, stopping short, and saying (usually out loud) “Why did I come in here again?” It’s not fun.

That’s why our recent trip to San Antonio was so….memorable.

First, we had planned on staying at the Historic Menger hotel, right across from the Alamo. Except that I forgot to make the reservations right away…and by the time I did remember to look at the list that I keep on my blackberry to avoid such minor catastrophes, the price of the rooms had almost doubled.

Had I remembered to make reservations in time, I would have been staying here: 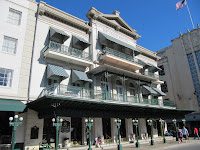 I would have had a lobby that looked like this: 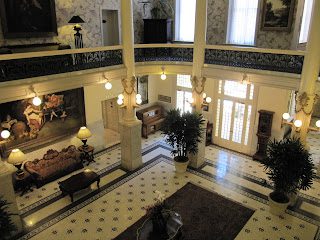 I could have been sipping mai tai’s in a courtyard that looked like this: 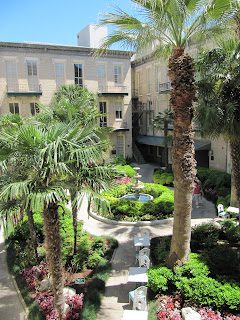 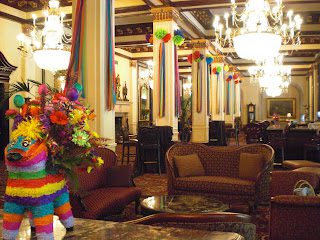 As it was,we stayed at the Historic St. Anthony…whose lobby looked like this, so I’m sure that no one is going to feel too sorry for me. But get out your hankerchiefs: Our room smelled a little funny, and it had a doorbell (cool) but no trash can (totally uncool). I suppose someone could have taken all of the trash receptacles out of the Menger as well–I didn’t look in any of the rooms.

Then, in my second bone-headed move of the trip, I forgot to check the San Antonio website to see if there were any festivals or events in town that might impact my stay. 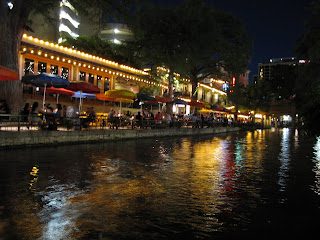 That was a biggie, because it happened to be Fiesta…the biggest party in San Antonio all year. Hundreds of thousands of people were in town…and all of them seemed to want to do exactly what I was doing. Unless you count what I wanted to do at midnight, which was to take a siesta…a time when the fiesta-ness of it all was just hitting full swing.

Fiesta is a historic event, starting with a weird parade and event called the Battle of the Flowers in 1891. The San Antonia-ites had so much fun throwing blooms at each other, they began adding more parades, a carnival, balls, and coronations of “royalty”, from King Selamat (tamales spelled backwards) to King Omala (Alamo, natch) and King Antonio, as well as lots of princesses with sashes around their chests and tiaras. 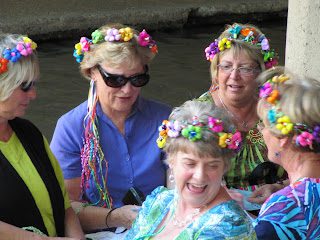 Today, Fiesta seems like Spanish Mardi Gras, complete with weird outfits and plenty of decorations. It also seemed a little like a May Day event, with girls of every age putting flowers in their hair. And it seemed a lot like Freshman Hazing Week at a big university…with lots of 3-foot long beers on the Riverwalk and margaritas that came in a 10-gallon fishbowl instead of a glass (which seems a lot like Mardi Gras, too).

One of the things I was really looking forward to in San Antone (I have to say that at least once because my husband sang the Monkeys song “What Am I Doing Hanging Round?” all weekend. Obviously, his memory of obscure derivative songs is working just fine) was visiting the King William neighborhood which–according to the photos I saw–looked like a great little Victorian enclave.

We took San Antonio trolley to the King William stop, and got out…only to see thousands of people crowding the quaint streets.

Yes, the King William neighborhood has a special festival as part of Festival. I won’t forget to check the website for events around town next time. 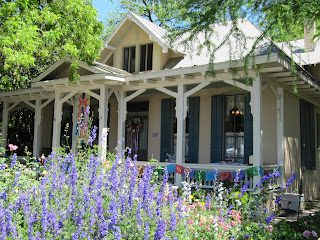 I did get to see a couple of the houses over the throngs of face-painted children, tiny little dogs (I’m still trying to remember why people like these things so much–if you have any insight please post your thoughts!), and big sweaty grown ups. They were lovely. The houses, that is. Not the big sweaty grown-ups. Lovely enough that I might go back. 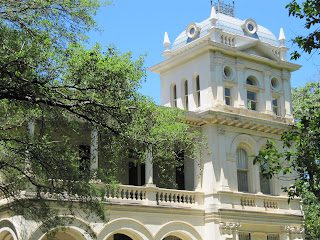 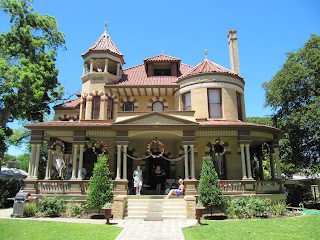 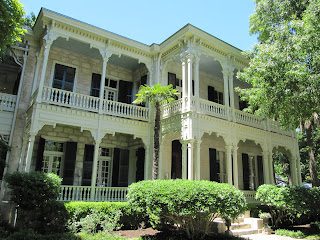 When I do go back, I don’t plan on visiting the Alamo. It was, ironically, not memorable at all. And frustrating, because–although the phrase Remember the Alamo stuck in my head–I didn’t remember anything about it except the chorus to Davey, Davey Crockett, King of the Wild Frontier. And the old mission/fort/t-shirt stand didn’t have a lot of easily accessible information. It did have a bunch of memorials spread around the perimeter of the main room, and that part was appropriately somber and peaceful…but it would have been nice to have some general information right there at the beginning so that I wouldn’t have felt so dumb as I walked through.

Luckily, the Daughters of the Republic of Texas put together a brochure with all the pertinent details of the 13-day siege and subsequent assault on the Alamo (I found it in the third building that I walked into, back by the gardens).

Before Davey Crockett (who is referred to everywhere as David, so I suspect Davey was a Disney makeover) told everyone to remember the Alamo, it was a mission, home to missionaries and their Indian converts. By the early 1800’s, the Spanish military had stationed a calvary unit there (Alamo is the Spanish word for “cottonwood”, and these Spaniards named the place after their hometown of Alamo de Parras, Coahuila. I’m glad they didn’t name it Coahuila–I would have never remembered that). 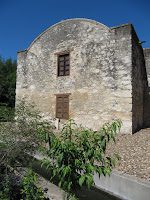 Things started getting memorable in December 1835, when Ben Milam led Texian (not a typo) and Tejano volunteers against the Mexican troops that were quartered in the city (so don’t you think for a minute that all of this border patrol stuff started with Mexicans coming north–we started it by going south, In fact, there’s a whole display in one of the back buildings that lists quotes from Mexican officials about their concern over white settlers moving in. They all seemed worried that the whites would take over their country, and snap up all of the good jobs for themselves. But that’s another story).

There were no immigration attorneys back in 1835, so the men just fought it out hand-to-hand (house to house, according to the Daughters of the Texas Republic). After five days of fighting, the volunteers won.

Then the victors moved in–sitting the shade of the Alamo’s tall walls, enjoying the butterflies in the back garden, eating burritos on the steps. Until two months later, in February, when the Mexican soldiers came back.

The brochure from the Daughters has a list of the names of men who were known to have died in the defense of the Alamo. The list includes David Crockett and Jim Bowie, who was known for his knife fighting, although it kind of let him down in March 1936.

My favorite part of the Alamo was the gardens, and the third building that listed all of the information on the spot. It was quiet back there, and less crowded, and you could really reflect on all of the people who had died in the old mission–on both sides. It gave me time to think about the women and the children who weren’t killed, but who had to live with the memory of 13 brutal days.

That’s the part I’ll remember about my trip to San Antonio. The quiet couple of minutes that I spent in the back gardens of the Alamo.

And the fact that next time, I’ll check the website to see if there are any festivals going on (https://www.visitsanantonio.com/). 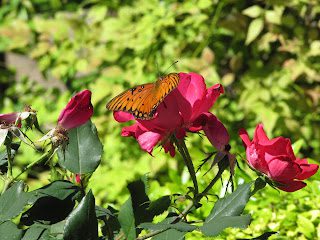