Writing a blog is inherently self-indulgent, but this one is more so than usual, so I hope you will indulge me for a bit. My grandmother passed earlier this month, and today is the memorial service for her. The hub and I were not able to get home for the luncheon thanks to Winter Storm Gia, but we are all dressed up and planning a nice dinner with good bread–my Grandmother’s favorite part of any meal.

I wrote the following eulogy, and my cousin Marci will be reading it. She was going to read it even if I could have gotten to Pennsylvania–I’m what you call an easy crier.

I’m sharing it because not only was my Grandmother very important to me and a lot of other people, but I think she’s a big reason why I ended up with a bed and breakfast. – Sandy 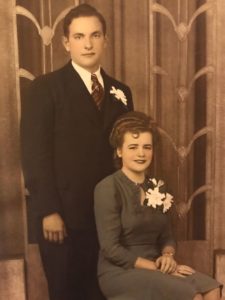 Esther Marie (DeTurck) Guinther was a lot of things in her 92 years.

She was a wonderful wife, who kept her husband’s memory living for the last 39 years. She was such a vivid storyteller, I felt like I continued to know my grandfather better, even after he had passed. She shared so many funny stories, like when he brought her a cheese tray after she had carpal tunnel surgery, knowing he would have to help her in the bathroom for a few weeks. Or when he bought her a dishwasher for Christmas. (Note: He only did that once).

When I got married in 1993, Grandmom gave me her wedding ring for the ceremony and she wished me as much happiness as she had with my Grandpop. They were married for 35 years, apart for 39, and I’m sure they’re dancing together today.

She was a meticulous hairdresser, who didn’t raise her prices in 15 years, and who could do pin curls like no one else in town. For a time, she did a lot of “funeral hair”, because her customers and their families knew the coroner wouldn’t set their loved ones’ curls correctly. She often said that corpses were the best customers—they never complained that she teased the top too hard.

Grandmom was an amazing historian, keeper of all of the family’s stories. She had a big family to keep track of—and she kept track of everyone. Want to know someone’s grandson’s name? Esther could tell you. Trying to identify someone in an old grainy photo? She knew who they were, as well as whose brother their father was, and at least one interesting story.

I will miss relying on her steel trap collection of memories. I’m glad I took the time to write down some of the stories she told me about each picture. The shot above with my grandfather, for instance, is called their wedding photo, but it was actually taken later. On the day of her wedding, my grandmother was serving as a model for some of the other hairdressers, and her hair was quite different–the students were experimenting, she said. My grandfather said no one would believe he would marry a woman with such weird hair, so they took the photo at a later time. I assume that means he liked this style.

Esther was a great sister, a strong mother, and a loving aunt. She was the second oldest of 13 children, and she loved her family fiercely. Seeing her laugh with her siblings, and the teasing and the stories, will always be one of my favorite memories. How else would we know that Grandmom used towels to tie some of the younger siblings to chairs when she wanted them to be good? (If she were here she would interrupt to remind everyone that the towels were never fastened in the back).

My Grandmother was the most generous person ever. I learned to stop saying I liked things around her, because if I admired a dress when we walked past a window display, or I told her I thought her jewelry was pretty, she would buy the dress or wrap the jewelry and give it to me the next time I saw her. My parents were dairy farmers, and we didn’t have a lot of money when I was growing up, so Grandmom and Grandpop took my brother and I to exotic restaurants (we ate with chopsticks once!), and Disney World, and nice hotels for brunch. They wanted us to be open to new experiences and try everything with an open mind (and stomach!).

I still am not as generous as my grandmother, but I aspire to her example.

Grandmom was so proud of everyone in our family. I grew up knowing that I was part of an extraordinary group of talented, smart, hard-working people. What a gift for a young person, because who couldn’t succeed with confidence like that?

She also was a bit of a personal stylist, with opinions on your hair, your dress, your unwaxed eyebrows (Do you need more wax? she asked me a few years ago, despite the fact she was legally blind in her left eye and had limited vision in her right).

There was no excuse for not looking good. It didn’t matter if you were going to the May Day Formal, or out to the barn–you took great care with your appearance. 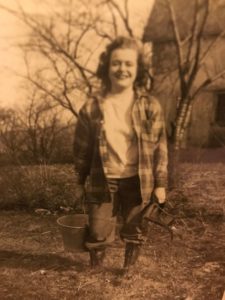 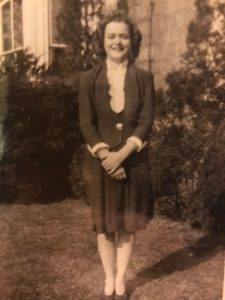 But even more than all these attributes, for me, my Grandmother will always be first and foremost the consummate hostess.

Grandmom planned dinner parties like people plan weddings today. There was course after course of carefully prepared food, in beautiful serving pieces, either lettered by her mother-in-law, or painted by her daughter, or part of her big collection of cut glass. She used to make a separate salad bar in the kitchen before every meal, with the table and lazy Susan filled with gorgeous pieces of lead crystal with mounds of carrot coins, and chopped eggs, and radishes cut to look like roses.

There were glasses from Great Grandmother DeTurck at all of her dinners–you had to gently slip the ice cubes into them *after* you poured the water, because the delicate stems could detach from the goblet. And fancy silverware, and intricately folded napkins. 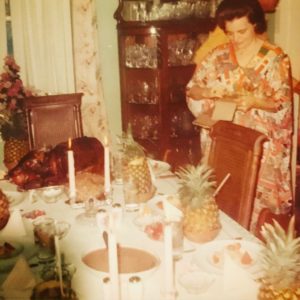 visited Hawaii, Grandmom decided to share the experience with her friends through a pig roast. She hollowed out pineapples for special drinks and she wore a brightly colored muumuu.

When the church had a progressive dinner–a party where the group went to a different house for every course–Grandmom was always one of the first stops. After she was finished serving, she joined the party for the next course and left the dishes on the sink because she didn’t want to miss what the other hostesses were making.

The mystery dinners were my favorite, and they may have been Grandmom’s favorite too. That’s where dinner guests received a “menu” of items with confusing names, and they had to choose three items for each course. One course could be a haymaker (fork), a sour puss (pickle), and Popeye’s pick (an olive), while the next could be PPPPP (peas), a wooden wander (toothpick), and HIJKLMNO (water).

If you got peas, a toothpick and a glass of water for your second course, you ate your peas with that toothpick. Grandmom laughed hard remembering how one of the dinner guests ate baked potatoes (snow on the mountain) with his fingers.

When Grandmom had a stroke two years ago, I would call and ask her if she remembered some of the mystery names for the items. I could hear the neurons reconnecting as she reached back into that astounding memory and pulled out the information. (I have the full menu reconstructed, if anyone would like to bring the event back)!

Like any good hostess, Grandmom knew when the party should end. She told us in November that she would die after Christmas. She amended that plan after she decided January would be better, because it wasn’t a very nice month anyway. My mother (and a lot of us) assumed that meant the end of the month. But when Mom mentioned doctor appointments for January, Grandmom simply laughed. She planned to be gone by the beginning of the month. “January 1 is the best I can do,” she said.

My Grandmother didn’t just accept dying, she welcomed it–the inevitable outcome of a life well lived, and a party well thrown. She ran towards that finish line with joy and laughter, talking to the people she loved—people that we could not see–as she said goodbye to the people in this plain, and reunited with people in the next.

My Grandmother–the good wife, trusted hairdresser, meticulous historian, cheerleader and PR agent, loving sister, personal stylist, and amazing hostess–was finally a most generous teacher, teaching us that dying can be as dignified and joyous and loving as living. And it can be as well planned as a wonderful party.

Today, our family is enjoying a wonderful dinner at one of my Grandmother’s favorite restaurants. I hope that we all enjoy this day the way my Grandmother wanted us to–with stories and laughter and light heartedness. And food and flowers and a really pretty table!

Thank you for indulging me, and for being a part of the last party she planned.